A while ago I showed you the invitations I made for my rugby obsessed little boy’s rugby themed birthday party.    The party was a great success and he had a ball.

He told me he wanted a Jesse Mogg birthday card (for those of you – most of you! – who have no idea who Jesse Mogg is, he plays for the Brumbies, my son’s favourite team)

Here is my effort:

I used a paper cut out doll from a 2 dollar shop and coloured in the Brumbies colours.  Jesse Mogg is number 15.   A large oval punch substituted for a rugby ball shape – and he was very pleased with the end result!

In case any of you ever have to host a rugby/sports themed birthday party, I had a brain wave and turned a piece of green felt into a “field” table cloth: 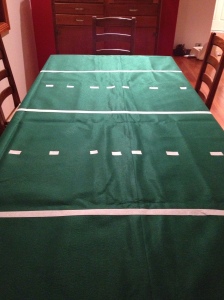 A few straws, some masking tape and some blu tak and we had some goal posts: 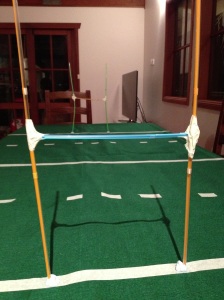 I also have to show you the cake – I don’t even want to tell you how long it took to colour the blue icing and cut out all the letters!  My hands looked like Smurf hands by the end of it!