Today I want to show you some crafts I’ve been making ready to decorate the table on Christmas Day.  This is the first year I’ve hosted Christmas at my house, so wanted to make the table look nice.

I have made laminated and stamped Christmas placemats, Santa hat place setting cards and Santa napkin rings for each guest. 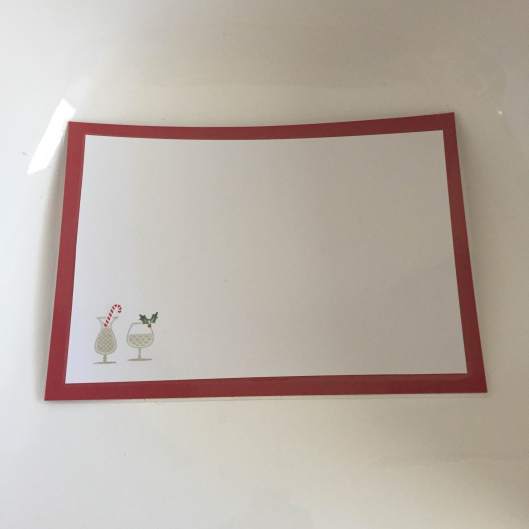 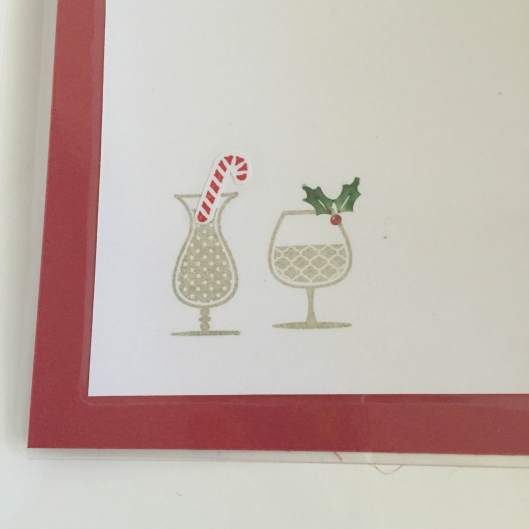 These are all things I’ve featured in my blog in the past.  If you’d like to know how to make them, please check out the older posts for detailed instructions:

I’ll try and remember to post a picture of the decorated Christmas table!

Wishing you all the best for a happy Christmas and a safe and fun festive season.

Yesterday I showed you my Christmas in July (in August!) themed easel card with a cute little punch art Santa hat.

I got the idea for the Santa hat from a blog called Denise’s workshop.  It took me a little while to figure out how to make the hat using the punches I have (all Stampin’ Up!) so I thought I’d show you how I made it.

First I punched out a red oval from the Large Oval punch:

I then used the Word Window punch to cut out a section on an angle to make the shape for the curve of the hat:

Next I cut a white pom pom out of a flower from the Boho Blossoms punch: 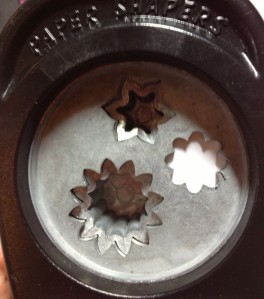 Then I cut out the fur trim on the hat from the Scallop Oval punch, and trimmed across the top:

I stuck the pom pom onto the hat with a mini glue dot and trimmed the bottom of the oval for the hat: 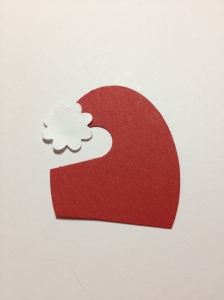 Tip: see how the cut where I trimmed off the bottom of the oval is not straight?   I found when I cut straight across the bottom of the oval the hat itself ended up looking a little ‘wonky’.   After a bit of trial and error I discovered it was better to hold the ‘fur trim’ across the hat and just judge by eye where the right spot to cut was.  Each time I made a hat it was a bit different, as each time I’d punched the Word Window section at a slightly different angle.

This picture shows you what I mean – judge how the hat should look and then figure out where to trim the bottom of the oval: 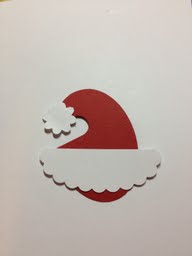 Stick on the trim and you’re done!

I decided to use these as place settings for our Christmas lunch.

They looked really cute all lined up together!

Hopefully this might inspire you for some Christmas craft a little later in the year.

Continuing my recent mission on using up paper from my enormous stash, my son and I recently decided to make some flowers I can keep in my office all the time. 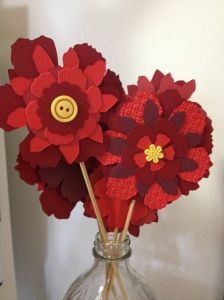 We used a variety of Stampin’ Up! punches – Blossom, Fancy Flower, Boho Blossoms, and various scallop and circle punches as well as some die cut flowers.   Stick them all together with glue and dimensionals to make flowers, and finish off with a button or brad in the centre.   We used Riding Hood Red, Cherry Cobbler, Bravo Burgundy and Poppy Parade (retired) card stock.

I attached these to ordinary kitchen skewers and put them inside an old vinegar bottle which had lovely leaf designs built into the glass.

Mr 3 is very pleased with the flowers in my office!